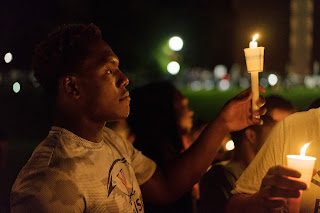 I suspect it won’t come as a surprise to any of you that a sermon about Jesus and foreigners would emphasize Our Lord’s compassion for any and all people of all nationalities and ethnic groups. Surely this is what we believe Jesus to have exemplified and the gospel to teach.

It might be more of a stretch to begin to understand that Jesus might not always have been quite so open to non-Jews. The story we have in the gospel reading for today [Matthew 15:21-28] is, I believe, one of the most significant in the entire gospel record, although I suspect that if we were to give a little test to even the most biblically literate Christians, few would point to it as being anything other than one of the many healing stories.

We find versions of the story in both Matthew and Mark. Mark’s is a good deal briefer and lacks certain details such as the presence of the annoyed disciples. Both contain the puzzling comment of Jesus about how children’s bread ought not to be thrown to the dogs. Matthew adds another comment that sheds light on the story. Matthew’s Jesus says, “I was sent only to the lost sheep of the House of Israel.” This is definitely a story about Jesus encountering a foreigner. And as it unfolds, before its happy ending, the picture is not a very pretty one.

First, Jesus was born into a culture that drew very sharp lines—one might say walls—between the children of Israel and non-Jews—gentiles. It was not always so. Many are the stories in the Old Testament of foreigners and Jews dwelling together and even intermarrying. Ruth, a Moabite woman who married an Israelite man, Boaz, became the great-grandmother of King David. But this tradition went underground as a result of the conquest of Israel by the Babylonians in the sixth century BCE. After a generation in exile, Israelites returned to their homeland and rebuilt their society, largely on the cornerstone of ethnic separatism. Their understanding of the disastrous defeat and consequent exile rested on the belief that they had polluted the worshiping community by intermarrying and above all by failing to keep their worship of the One True God (as they saw it) pure from secularizing influences and from contamination by other (that is, false) gods. A whole tradition grew up in support of keeping Israelites—Jews—not only from intermarrying but indeed from associating with foreigners if they weren’t themselves Jewish.

Let me hasten to add here an important caution. While it is true that this tradition of separatism is still alive in some parts of the Jewish community, don’t make the mistake that I often made out of ignorance in my childhood, namely assuming that Jewish tradition had remained largely unchanged since Jesus’ time. In fact, Judaism is markedly different in many ways today. Today’s Jewish community should not be misunderstood as necessarily hostile to the teaching of Jesus, no matter how much emphasis the New Testament puts on the divide between Jesus and the religious authorities of his own day.

Jesus no doubt to a large extent bought into the mindset of the culture in which he was raised. An important feature of that was the wholesale dismissal of non-Jews as simply racially and religiously inferior to Jews. When we trace the journeys and encounters of Jesus is the earliest gospel traditions, we see that, although he ventured into gentile territory, he made no overtures to gentiles to follow him. His mission, as reflected in this story, was directed to the House of Israel.

All the more strange then that, on the heels of a controversy with religious leaders among the Jews that Jesus would strike out for the Mediterranean coast, an area that had long been thick with non-Jewish people and culture. It was a veritable hodgepodge of ethnic groups and had been for centuries. It is there, near Tyre and Sidon, that this gospel story opens. Matthew tells us that Jesus “withdrew” there, suggesting that he was literally on retreat from the thick of controversy with his religious opponents. Mark mentions that he entered a house, perhaps that of a friend or sympathizer, and did not want it known that he was there, though he couldn’t very well hide. Enter this woman, identified by Mark as a Greek Syro-Phoenician, and thus a Gentile, and by Matthew as a Canaanite, and thus one of the ancient enemies of Jesus’ people who resided in the land long before the Israelites invaded them. The woman is desperate. Her daughter has a severe case of demon possession, a general term that encompassed everything from literal possession to disorders like epilepsy to general mental illness.

Jesus’ behavior towards the woman is totally out of character even in the context of the gospel record, not to mention what we have come to believe about Jesus. Why? Why when encountered by a mother desperate for her seriously ill daughter’s healing would Jesus not so much as answer her a word? He seems to agree with his disciples who apparently are most disturbed because of the woman’s persistent pleas. But neither Jesus’ refusal to accede to her requests nor the disciples’ scorn deter the woman. When he answers her by saying, in effect, that she and her kin are but dogs compared to the children of God known as Israel, she soldiers on. “Yes, Lord, yet even the dogs eat the crumbs that fall from their master’s table.” Those are pretty much her words in both versions of the story, so it is quite likely that they contain the point of the matter. It is indeed for this “saying” of hers, according to Mark, that Jesus then addresses her with a term of deep respect, “O woman, great is your faith!”

So the question shifts from why Jesus initially behaved as he did towards the woman to why the sudden change. Clearly he was impressed, moved even. Maybe it was the woman’s chutzpah in persisting until she got what she wanted. Maybe it was her willingness to humble herself. Perhaps it was that here was a socially powerless woman of no account by Jewish standards confronting a Jewish healer, courageously breaking through the barriers between them. Whatever it was, it seems to have been a moment of profound change in Jesus’ understanding of his own mission. If we follow Mark’s geography, the very next place that Jesus goes after this visit to the coast is well over to the east, into gentile territory. The next healing story that we have from Mark is the healing of a gentile deaf man with a speech impediment. In a very real way, that man is the very picture of what one of the psalms says about the gods of the gentiles, and about the gentiles themselves.

Our God is in heaven;
whatever he wills to do he does.
Their idols are silver and gold,
the work of human hands.

Those who make them are like them,
and so are all who put their trust in them.[1]

So there you have it.  The difference between the children, made in God’s image, and the dogs, just like their gods. And that is the point at which Jesus seems to have had a conversion experience. We can but wonder what had preceded it; but chances are all those nights in prayer, the forty days in the wilderness, all that struggling, the continual turning over and over in his mind the question of how to re-write the inherited script of Messiah—all of these must have paved the way for the major shift which awaited a lone woman, a foreigner, a descendent of Israel’s enemies, to effect in Jesus’ own self-understanding. What is certain is that from this point on, he opens himself to all comers, Jew and gentile alike.

Do you see anything in this week’s headlines to which this even remotely relates? I doubt that you can miss it. I will tell you now that this sermon is not about Donald Trump. It is about you and me, and how one of our biggest challenges is to insist on the authenticity of Jesus’ message of inclusion. If he whom we call Son of God can change his mind and focus, this must say something about the necessity of human beings doing so as well. But the people I’m concerned about right now, this very minute, are not the haters in Charlottesville last week, but rather the good Christians gathered here today. Don’t let our faith be hijacked by those who eagerly turn it into an apology for narrowness and exclusion. Don’t sit idly by while the forces of evil burn crosses and wave flags intimidating the vulnerable. Stand up and make your witness. If you can do so without succumbing to the force of hate, more power to you. If you can find the begging Canaanite in your neighborhood and open your heart to her in the name of Christ, go to it. And even more, if you can see, as I can, the residue of race pride or gender pride or traces of fear and distrust of fellow human beings in yourself, recall the example of him who once upon a time abandoned the notion of a limited mission and became open to any and all who cried to him for help. What he did and who he was is our mission and our call. Nothing more.
And certainly nothing less.