Twenty years have sped by since the longest night I ever spent.

It was late spring in 1997, two years after the onset of what I call “The Second Coming (Out).” I was trying very hard to keep afloat in a world where I feared total disaster were I to reveal anything of who I was. Priest in a large Episcopal church in a small Southern city, married, the father of two, I was alone in that most lonely and stifling of places: the closet. The door was ajar. I could see just a wee bit of light.

That light came from New York City. Richard, my best college friend, lived there, and had invited me to visit. It was Pride weekend. He had mentioned to me the possibility of going to a dance. I was ecstatic. I imagined a dimly lit bar where men danced with men. Absent any experience and not much more imagination, I naively thought that maybe a pink golf shirt might be gay enough to wear.

No slow dancing, no low lights, nor gentle touching was any part of the scene of the cavernous venue where I landed with Richard and Joshua, a young guy whom Richard knew and introduced as a style expert. The place was Roxy, that era’s answer to the famous “Saint,” dance oasis of an earlier period. The music was deafeningly loud to the point I could not hear the plan for regrouping after a certain time. And the persons per square inch made any strategy we had for reconnoitering totally impossible anyway. I found myself in a knot of twinks, wondering if Joshua’s attempt to dress me correctly had worked to keep me out of total dweebdom. I shook and writhed as best I knew how—which wasn’t too bad, I thought. I dared not touch the young body that kept (I thought) bumping into me intentionally.


Soon the multitude had completely absorbed Richard and Joshua whom after an hour or so I completely lost track of. After three or four hours of ear-splitting noise, not knowing a soul, unable to speak (my main resource for being social in any situation), and with a bladder about to burst from the two beers I’d managed to down, I made it to the long line waiting in front of the men’s room. When I finally got in, I waded through water (I hoped) that thoroughly wet my Chuck Taylors (“those actually will do,” Joshua had said of my footwear). I stepped outside. Day was breaking.

Nice that Manhattan is so easy to navigate. Rather than wait for a cab, I walked to Richard’s. Sunday sunshine grew brighter as I wound my way from nearly the Hudson over to the West Village. I had no idea what had ever become of Richard and Joshua, but when I finally unlocked his apartment door, Richard sat bolt upright on his chaise longue and allowed as how he had come home many hours before. Dead tired, I made it to the bedroom, shed my wet Chucks, jeans, and tight-fitting tee that Joshua had recommended in Old Navy, and fell upon the mattress.

For the first night in my life since as a frightened child I’d hear my parents quarreling in the next room I cried myself to sleep. Totally alone, much more so than ever I’d been in the closet that at least held junk and costumes, I sobbed. I cried because I couldn’t go back into the closet because I knew I’d die there. I cried because the one love I had at the time was little more than an illusion, vaporizing before my very eyes. I wept because the marriage that had defined me was unraveling and I didn't know how to stop it. The priest I once wanted to be was incongruous with the man I knew myself to be.  I knew neither where I was nor where I was going.

In a few hours, these twenty years later, I will kneel, as is my custom, as a priest smudges my forehead with a crude ash-made cross, and I’ll begin the soul’s journey again from dust to glory. Rituals like that are best when we consciously realize that they play upon the strings of what our lives actually contain. Memories, hopes, disappointments, failures, new beginnings: all lie in a pile until some word, action, maybe some ceremony, orders and shapes them. I can relate to the ashes and cross precisely because of that longest night twenty years ago, and others like it before and since. If I did not know dark, I could not see light. Nor would it ever make sense to me that in such places as a tear-soaked bed the Holy One sneaks up close, unrecognized, silently waiting to be noticed.

Hard as it was, I would give nothing for that long dark night of the soul.  I would never have become who I am were it not for the painful and tortuous trip on which I found myself multiple times knocked off my perch, fallen into the dust till finally I came to realize that I was dust itself.  It is not so bad being dust.  That's the stuff we're made of.  Dirt.  And the wonder is that, from time to time, in these bodies of dust we actually see amazing glory, not infrequently shining more brightly through our tears. 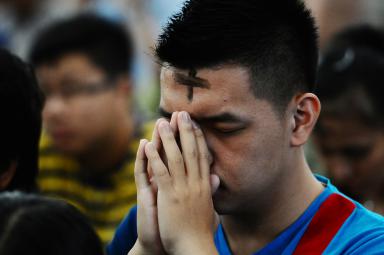