I growled.  “That’s your first response.  What’s your second?”

So Joe and I sat across from the desk we share and got into a discussion about resurrection as I was beginning to compose my Easter sermon.  I had no idea back then in 2012 that it was going to change me.  For one thing, it was nothing new, my asking this question. I’d been posing it for no fewer than forty years, intrigued since at least seminary with the notion of what it means to live the resurrection.

In the course of our conversation I pulled off the shelf a book I’d had since 1970, Norman O. Brown’s Life Against Death.  Brown was a literary Freudian.  The final chapter in that book is entitled “The Resurrection of the Body.”  Here is a snippet of Brown’s argument that I shared:

The time has come to ask Christian theologians…what they mean by the resurrection of the body and by eternal life.  Is this a promise of immortality of life after death? In other words, is the psychological premise of [Christianity] the impossibility of reconciling life and death either in “this” world or the “next,” so that flight from death—with all its morbid consequences—is our eternal fate in “this world” and “the next”?  For…that perfect body, promised by Christian[s]… is a body reconciled with death.

In the last analysis [Christianity] must either accept death as part of life or abandon the body.[1]

So we talked on, Joe and I, about the acceptance of mortality, and about how Jesus embraced the body and the body’s inevitable fate, death.  We chewed on the notion of how resurrection is impossible outside the body, and thus of how the body is central to any discussion of resurrection, while it can easily be tossed aside if immortality of the soul, for example, supplants it.  That happened when Christianity exchanged its twin foundational doctrines of incarnation and resurrection for a pervasive suspicion of the human body and a campaign to classify anything material as inferior to anything “spiritual.”

I grabbed another book, one that I love.  It’s C. S. Lewis’s The Lion, the Witch, and the Wardrobe, in his Chronicles of Narnia.  I flipped to that passage where Aslan, the great lion, willingly goes to the Great Stone Table to let himself be sacrificed in place of pitiful Edmund, who’s run afoul of the White Witch.  It’s much too long a passage to read to you, or even to sum up.  Suffice it to say that the little Pevensy girls stand in the shadows watching a jeering, mocking, cursing crowd of fiends and brutes cruelly shave, muzzle, and finally bind the great cat to his death on the cold stone slab. 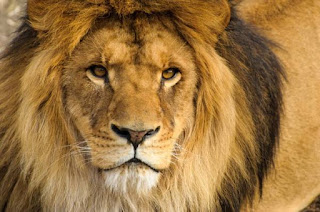 Lucy and Susan manage in the darkness to remove the muzzle from the dead lion, and sob and cry until at last they notice that little mice have appeared. The mice, perhaps hundreds, have come in the darkness just before the sun has risen and are gnawing through the ropes binding Aslan’s corpse.

A great crack then breaks the stone table in two from top to bottom.  The frightened girls, who could not bear to look any longer at the horrible scene, turn and, seeing no Aslan, imagine that something awful has happened to his body.  One asks a question and they hear a voice behind them.  “Yes!”  There shining in the sunrise is Aslan himself. No, not a ghost, but fully alive, even with his mane grown back.  He tells the girls to catch him if they can, and the three run, romp, laugh, and play until girls and lion lie panting in the sun, not the least tired or hungry or thirsty. [2]

I was in tears.  I put the book down.  “Joe,” I said in awhile, “I want to live like that.  I want the rest of my life to be nothing but resurrection.  I want to taste it, feel it, love it until—until I die.”

We are at the beginning of Holy Week when we get to follow that dolorous way of the cross, watching another rabble mock and scourge and spit upon and string up the Son of Man.  So we’re not quite ready entirely to ponder the resurrection just yet, are we? Instead, let's look at two stories. One is a vision, Ezekiel’s celebrated vision of the valley of dry bones.

A voice says that they are the whole house of Israel, as good as dead, dismembered, bleached dry, useless.  But the vision of new life unwinds. Bones rattle together.  Muscle and sinew and skin cover them.  Then the ruah, the wind, the spirit enters them and becomes their breath.  It is a redoing of creation.  The spirit that moved over the face of the deep when there was nothing but a watery darkness now moves into the slain and brings them to life.  What does it mean?

Then another story, even weirder than the vision because it purports to be factual.  Jesus gets word that Lazarus, a man whom he loves, is ill.  Instead of rushing straightway to Bethany, Jesus delays.  By the time he arrives, Lazarus has died and has been buried for four days.  Jesus is deeply moved, weeps even.  They take him to the tomb.  He prays.  He calls.  “Lazarus, come out!”  And the man whom he loves comes out not as a corpse, but alive, still wrapped in the grave-bonds.  “Unbind him,” commands Jesus. “Let him go.”  What does it mean?

Ezekiel tells us the meaning of his vision.  What happened in the valley of dry bones is what Yahweh will do to Israel.  They say that they are no better than bones, their hope clean gone, their future cut off completely.  Yahweh will breathe the Spirit into them, bring them home to their own soil.  And they will know who has recreated them.

And the meaning of the raising of Lazarus?  In John’s narrative it is the last straw for the authorities, the overwhelming impetus for putting Jesus to death.  In a larger sense, one cannot read the story without hearing overtones of the story which is yet to come, a story of a tomb sealed with the customary stone, a dead man inside covered in grave-clothes down to a napkin over his head, a voice shaking the world like thunder coming from heaven.  What does it mean?  You get to figure it out.  But I think I can give you a hint.  There is only one thing deeper than death, and that is the power of pure love.  To put it in C. S. Lewis’s metaphor, it is the Deep Magic. Magic deeper than death decreed before the world began that when a willing victim who had committed no treachery was killed in a traitor’s stead, the Table would crack and death would start reversing itself.  As Jesus says before his own death, “Greater love hath no man than this, that a man lay down his life for his friends.”

So all of these stories, The Lion, the Witch and the Wardrobe, the “Valley of Dry Bones,” the “Raising of Lazarus” are like so many sparks emanating from a single bonfire burning at the heart of human experience.  They all get at the truth differently, but the truth they get at is a truth about embracing mortality.  It is the  Truth himself who oddly says, “If you care about saving your life, you will lose it, but if you lose your life for my sake, you will find it.”   Every instinct in us wants to save our lives, beginning with our bodies and spreading out to everything material that props them up.  We love our things, our systems, our habits, our idols, our money, our pedigrees, all that stuff.  And, ironically, not always but often, much of that stuff comes between ourselves and our plain old bodies, our natural naked vulnerability.  We have a hard time even believing that we would ever be safe, let alone whole, if we once stopped worrying about it all.  We’ll make a thousand excuses to hold on to what we’ve got.  We’ll do our best to fend off change, mistaking change as life-threatening.  And the irony is that death is defanged the moment we begin to embrace the inevitability of death.  That’s not the moment when we know we are on our way out of this life, but the moment when we can behold our own bodies and love them the way God loves them.  St. Bernard of Clairvaux once said that the highest form of love was not the love of God for God’s sake, but the love of self for God’s sake.

That’s where new life is born.  And it does not stop where it starts. When we begin to love our bodies, our senses, without which the knowledge of God is impossible, we begin loving the things and people around us as we love ourselves.  Start practicing that kind of love and you’ll find that it’s a lot more fun than arguing, fussing, and fighting.  Begin loving profligately rather than measuring love out cautiously and you’ll find yourself laughing more than controlling.  Gradually shed your fixations and get playful and you’ll see how right Jesus was when he said that unless you become as a little child, you’ll just miss the boat to the kingdom.

Here’s the secret, and it is a pretty well kept one.  There is a difference between making a pact with death and embracing death.  On the one hand, making a pact with death is to resign oneself to the ways of death, most of which are pretty good at masking as life-sustaining, like that list of things we desperately want to cling to.  On the other hand, embracing death is facing into the wind, stepping out into space trusting that there’s a Love strong enough to hold us close and never let us go.

What this troubled world needs is a community that doesn’t just recite a creed about the resurrection, but one willing to risk living the resurrection.  Show them by your life how to have a little more, or a lot more, Eros, and less strife. Form or reform communities where dreamers, mystics, poets, singers, artists, political idealists, social workers, healers, psychoanalysts, theologians, philosophers, writers say no to dead polemics and yes to reimagining a world living with its bodily senses wide open.[3]  Teach others how to live soulful lives the way you tend to your garden and the way you prepare and serve fabulous meals.  Look for opportunities to love and serve those hard to serve and harder to love.  And, in Norman Brown’s words, a little consciousness might help: “a little more self-knowledge, humility, humanity, and Eros.”[4]

And every time you stand on a gray day before some apparently dead end, listen carefully for a Voice that will shake your life like thunder.  It’s the old incantation fixed from all eternity by him whose Body is one with yours:  “I am resurrection.”