Why the big deal about forgiveness?  Matthew in his gospel makes sure that his readers know that in Jesus’ mind and teaching forgiveness was not negotiable.  In short, everybody needs it, and ultimately Abba is willing to give it.  But there is a catch.  In order to get it you have to give it, this forgiveness.  And that’s that.  The only petition in the prayer he taught his disciples that is attached to a condition is “forgive us our sins as we forgive those who sin again us.”

Some years ago, a senior high Sunday school leader opened class one morning by saying something like, “You’ve all heard of the Ten Commandments, right?  Well, ten may be two too many.   Which two would you leave off if you were giving them to the world?”  There ensued a pretty lively discussion in applied moral theology.

I thought so well of the notion that several years later when I was leading a senior high class, I recycled that question.  Much to my surprise the commandment that got the greatest number of votes for being eliminated was “Thou shalt not covet.”  When I asked at one point what made that one so unpopular, one kid said, “Well, isn’t that what you want people to do?   If you have a new skateboard or pair of shoes, don’t you want people to envy—covet—what you have?”  And so said they all.

What that discussion revealed in no uncertain terms was that beneath the varnish of a Christian morality lies an assumption shared by many, many people who are way beyond chronological adolescence:  that the way to live life is very different from anything that Jesus ever taught about the central reality that he posed as a distinct alternative way of living, a reality that he called the βασιλεια του θεου, the kingdom or reign of God.  It is a kingdom in which the puffed-up self, the inflated ego, the cutthroat competitor, the win-at-all-costs mentality, undergoes a death and resurrection.  The βασιλεια is a kingdom in which there rises to life a new self, as fresh as a newborn baby, grounded in valuing giving over receiving, sharing over accumulating, practicing lavish hospitality, prodigal love, and unmeasured graciousness.  Why?  Because that is what Abba the king of the kingdom loves and does.  And those who belong to Abba take on and live out the qualities of Abba.  This is what Jesus is and does.  His nature and essence is identical with Abba and thus he lives the life of Abba.  He practices open table fellowship with any and all, regardless of their social or moral standing.  He embraces the sick, includes the outcast, heals the helpless, frees the oppressed, and models a life of generosity.  To be sure, Jesus has a hard edge in some ways.  He is not namby-pamby.  He confronts oppressors, takes on authorities, challenges limits, redefines morality, and ultimately pays the price of getting killed by those who experience him as an intolerable threat to the established order.  Still, he boldly crosses boundaries separating male and female, religious traditions, ethnic identities, and even enemies.  He teaches the rich to sell what they have and give to the poor.  It is in the context of all of that show-stopping liberalism that Jesus says, when fielding a question about how many times one must forgive another, in effect, you never stop.  Not after seven or seventeen, or seventy, but so many times you can’t keep count.  In other words you can’t be stingy and forgiving at the same time, not if you are in the βασιλεια.

Perhaps people in general, and clearly Americans in particular, are fond of finding easier, quicker ways to do almost anything.  Unfortunately, practicing forgiveness does not lend itself to quick and easy 1-2-3 steps.  It literally takes most people a lifetime of practice, and in this case practice does not necessarily make perfect.  We might as well know at the outset that forgiveness is something we’ll never get exactly right.  It might not be very complicated, but it certainly is challenging.  The countervailing force of self-protection is strong, and the energy demanded by the practice of forgiveness is considerable.    You tell me.  How many of you here have somewhere in your life one or more relatives or others that you are not on speaking terms with?  How many of us carry around one or more grudges?  How many people have written you off, cut you off, fired you from their lives, and how many people have you given up on?  If you can honestly say that there is no one in your life that you are at serious odds with, you are most blessed and we could probably use your coaching to great advantage.

Forgiveness cannot exist in a vacuum.  There is nothing to forgive unless there is a standard, such as a law or an agreement or a commandment, clear or implied, by which an action can be weighed and found faulty.  At that point, whoever is offended has to call the offender to account or the offender must come to realize that he or she has committed an offense and must take responsibility for it.  Then some sort of confession is in order, ideally a real and heartfelt confession, an admission of guilt, an apology, a willingness to make amends for the offense however it is appropriate.  The cycle is not complete until forgiveness is granted and, if appropriate, restitution is made by the offender.  That is how it works—ideally.

But the ideal isn’t always actually realized.  Sometimes the offender won’t budge.  Sometimes apologies are offered but are not sincere.  Sometimes the whole works are fowled up because something like addiction or illness gets in the way and subverts the process of reconciliation.  What then?  Ah!  We cannot say in a one-size-fits-all mode.  Sometimes it takes time, years maybe, decades, even centuries, as we are now experiencing as we slowly come to awareness in this country of the complexities of reconciliation and restitution regarding racism and the yet un-atoned-for sin of slavery in the American past.  Sometimes it means hanging in with openness and hopefulness when everything and everybody says, “Give up and go home.”  On occasion it means confronting hard realities and difficult people with a no-nonsense call to change.  Always it means never relinquishing one’s grip on love as an overarching  theme and practice.  In the βασιλεια one never stops forgiving because it hasn’t worked.  The reason is not that we beat up on ourselves for the fun of it but that Abba never withholds forgiveness except to those who themselves refuse to forgive.

Mochtar Lubis, an Indonesian author, wrote when he was imprisoned during  the 1970’s political struggles with the dictator Sukarno, a novel called “Tiger!” The story is about seven men who work in the forest collecting dammar, a resin.  After killing a deer and eating it, the men discover that they have killed prey being stalked by a tiger.  One of them convinces the others that the tiger has been sent by Allah to punish them for their sins.  Suddenly they are in a fierce battle on two fronts.  Outwardly they are terrified of being killed by the tiger who attacks them one by one, compounding their fear.  Inwardly, they struggle and wrestle with the sins and transgressions that each has committed, fearing to confess and fearing not to.  This pack of men devolves into near savagery, mad with fright.  Ultimately they come to realize that the tiger who prowls around seeking someone to devour is one of two.  The tiger that is harder to confront is the tiger within themselves. 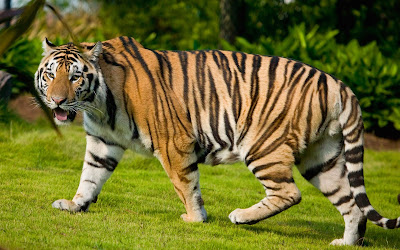 The tiger within ourselves:  that is the beast that stalks the world, and its den is the human heart.  We could shoot every tiger threatening our peace and security and still find that we were as vulnerable and fragile as ever, were we to carry within us the dead weight of collected wrongs and injustices that we never have forgiven.  And the fiercest tiger of them all is the fanged tormented monster crazed by the things we have never forgiven ourselves for.  Until we accept the grace to forgive ourselves we will not likely forgive much of anyone else.  And if we cannot find the way to forgive those who have sinned against us, we march on through all our days always wanting a place at the table in the βασιλεια, somehow never finding the way in.

Seventy times seven.  Does it seem impossible?  I think Abba means it to be impossible.  It is one of Abba’s ways of quietly beckoning us to give up the fantasy that we can fix ourselves and others.  Generally we turn to Abba when we figure at last that we might just give Abba the chance to do what we cannot possibly do alone.